The Land of Smoke and Mirrors

In the past few days, some Hollywood production team set up shop in my neighborhood for a film shoot. They’ve basically taken a traditionally blue-collar Irish and French Canadian neighborhood which is fast undergoing gentrification and have tried transforming it into Bensonhurst, Brooklyn, New York. 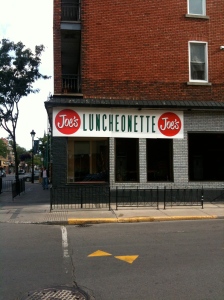 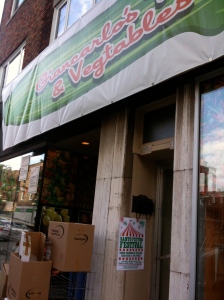 This place is normally a pet supplies store, notice the fake sign.

My French cheese shop is now a candy store 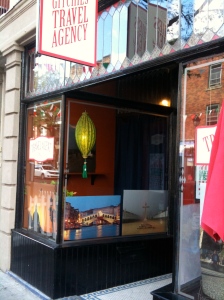 My favorite tea room is now a travel agency.

Covering the sign of a notary’s office with the American flag.

I have to admit, walking along my usual route to the subway station has been an amusing exercise the past few days. Watching how storefronts are transformed with fake props and posters, the hum of frantic energy the production crew gives off, running from here to there with longs cables, the security team that was set up at night to watch over  the props and set so no one would take anything, the director loudly barking out directions. It takes a lot of work to create artifice and illusion and cover up reality, I thought to myself.
That got me thinking about the whole nature of illusion and the power fake images exert on our lives. Marketing, public relations, branding, propaganda, Hollywood films, commercials, all of it plays basically the same hand over and over again: create an image, an idea, a meme, anything which somehow undermines a person’s self-confidence or somehow hits an underlying insecurity and brainwash them into thinking that this new product, this new exercise, this line uttered by that movie star or this image will somehow take care of that insecurity. It’s making money at the expense of human dignity and a complete disregard for the personhood of individuals. 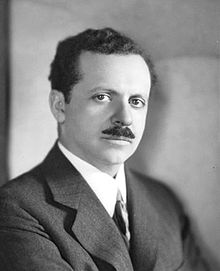 Edward Bernays, Sigmund Freud’s nephew and the asshole who created marketing and PR.

The Europeans always looked at film as an art form while the Americans always looked at it as a business. That might explain why I prefer watching old movies, foreign films and independently-made movies over contemporary Hollywood blockbusters. For example, I personally can’t stand Steven Spielberg movies. With their cliched characters, wooden dialogue and the grandiose and pompous John Williams musical compositions, practically every time the music starts, it’s the most obvious cue that now you’re supposed to get your tear ducts ready. On the other hand watching films by directors like John Sayles, Louis Malle, Wim Wenders, Jim Jarmusch and Lars Von Trier have at times, left me elated after walking out of the cinema, with me thinking about the film for days afterwards. I remember watching Sayle’s film “Men with Guns” and feeling like I just stepped out of a lush dream, a deep meditation on war. More recently, Von Trier’s last movie, “Melancholia” left me speechless for days, particularly the impact of the last scene when viewed on a large movie screen.
Hollywood has always been known as the plastic and tinfoil dream machine, but real dreams can’t be manufactured and dictated. They come from a sacred place, somewhere deep within the human soul. Exploiting and hijacking that for a few dollars is just plain crude, vulgar and crass. Many of Hollywood’s “ideas” are informed by the cultural background of the large contingent of Eastern European Jews who founded Hollywood. Their ideas, their archetypal dreams have now been played over and over again to the point where they are now firmly embedded in the general culture and internalized by everyone else. That simply shouldn’t be.
I had my run-in with Hollywood too. When I went to LA to do the 11:11:11 ceremony at the Cross at Cahuenga, I stayed in downtown Hollywood, not far from the Graumann’s Chinese Theatre, where practically all film premieres take place.

The American Film Institute were showing a whole slew of movies there, so the barricades would go up every evening and the fans would line up for autographs and pictures while the stars walked the red carpet. Like some of you know, I had a huge crush on Micheal Fassbender so I thought it was more than a little coincidental that “Shame” was showing that night and Fassy would be there for the premiere.

Stunning on film, not so much in real life.

I waiting behind the barricade and watched the whole celebrity spectacle unfold before me. It was a pretty crisp evening and I was in jeans, a Smiths T-shirt, with a wool cardigan and I was still chilly. Two Scottish girls were there beside me and they were in full parkas. Then the starlets started coming out of their limos, wearing strapless and flimsy dresses. The 3 of us in line started commenting on how cold they must be. Some reporter asked one of the starlets what dress she was wearing and she replied with the name of some designer. The Scottish girls mentioned that they never heard of that name. I replied that it’s probably some celebrity fashion magazine like “In Style” asking the question and how these starlets are stupid for investing so much money on these dresses when it’ll go into the magazine this month and be completely forgotten about by next month’s issue. I think the starlet heard me say that because she gave me a dirty look afterwards. 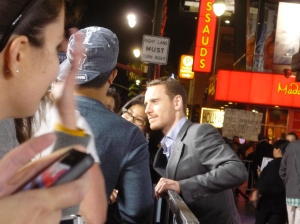 Finally Fassy showed up. And…he was nowhere near as sexy in real life as I imagined him to be based on what I saw in the movies. In fact, he gave off a bit of sleazy and creepy vibe. Where was all that virility and smoldering sexuality that I saw in the films?  No where to be seen, that’s for sure. When he finally got to our spot in the line against the barricade, he looked at my T-shirt and flashed me a  grin. I felt repulsed.
One more illusion out the window.
Oh well.

2 thoughts on “The Land of Smoke and Mirrors”