And the band played on

Posted on December 27, 2012 by Earth Energy Reader
December 21, 2012 has come and gone and we’re still here, still standing, still going strong like I always suspected.  I mean the whole 2012-thing was a cottage industry in itself. The Mayan Riviera in Mexico was apparently booked solid since last year. New Age hot spots like Sedona and Mount Shasta had 2012 conventions and conferences and spiritual gatherings going on, (none of it cheap, might I add).

I wonder what those people who were convinced that something epic was going to happen are feeling and thinking now. No doubt, the New Age shysters have gone back to the drawing board and are probably working on a new date already. 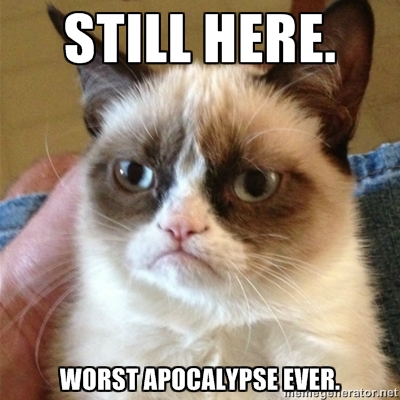 Like some of the prophecies and videos I’ve previously posted on, while I do think there is no denying the fact that an energetic shift is underway, this whole idea of endpoints and specific days always struck me as bit contrived. Rather it’s really about an ongoing process which operates on 2 congruent and concurrent levels, the microcosm (i.e when we work on ourselves) and the macrocosm (the cosmic truth vibrations, Kali Yuga ending etc.). I think the real transformation is going to happen when the 2 converge.

I’ve been due for a retreat for awhile now so I figured this Mayan Calendar  event was as good a time as any to head out of town, and give myself a few days in a log cabin deep in the Canadian wilderness with nothing but books to read, a crackling fireplace beside me and the sound of a running stream several feet away from me. Some time to regroup, rethink and relax before the real holiday madness took over. 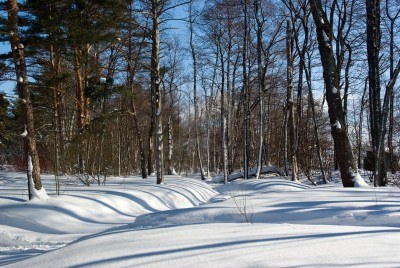 I discovered a place, not far from the Vermont border, in Quebec’s Eastern Townships, the panhandle into the Appalachian mountains, called Mont-Elan. Nestled in a beautiful valley, where gold was once mined (you can still pan for gold in the stream), the presence of gold and evergreen trees right away alerted me that there has to be some high-frequency energy going on there so after checking out the website, booked myself a tiny cabin there. They also have yurts, Wifi tee-pee’s, prospector tents and larger chalets. I couldn’t help but think that in the summer, this would be a fantastic place to hold a yoga retreat. 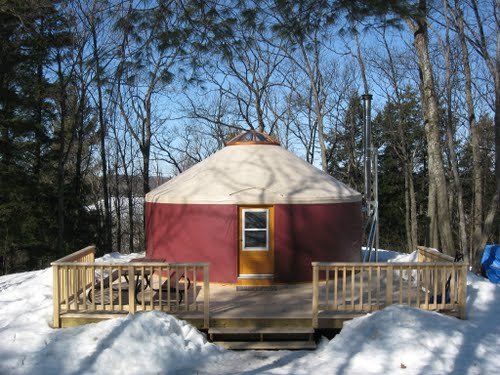 I was not disappointed. Hiking through the snow-covered forest, with clean country air, mountain spring water streams, being in such a pure environment with nothing but me and my thoughts, and having very little with me, no phone, no laptop, no distractions , no TV, just a futon bed, a table, a microwave, a small butane cooker, a wood-burning stove which heat up the cabin in no time, water and food to last me a few days, it really hit home that you don’t need much to live on. 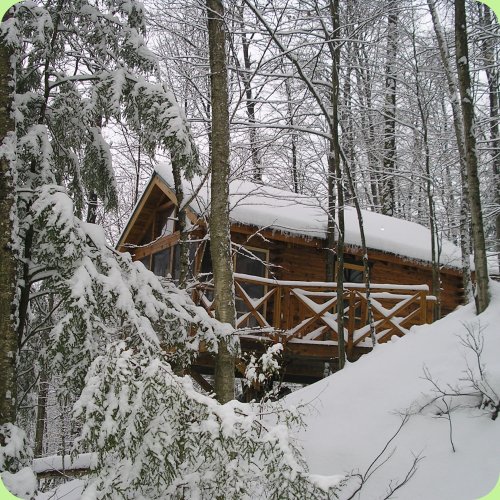 Aside from throwing another log into the fire, making simple meals, drinking my morning tea by the stream, just reading and ruminating over my books were my biggest worries.

The stream at the foot of my cabin. BTW, where is Mr. Tumnus?

As I had posted earlier, Father Henry, the Catholic exorcist priest who I have been conversing with, lent me two tomes on the discernment of spirits. In essence when to know when some third party influence is trying to screw you up or help you and if that third party is bad guy or a good guy. Now, before I go on, I just want to make it clear I’m not a Catholic and not someone who is into proselytizing. I do however, have no problem picking up teachings to add to my own bag of tricks, even if it’s one line, regardless of what spiritual tradition it comes from, just as long as it works for me and helps me on my way. A “Take what you need and leave the rest” philosophy suits me fine.

The books are based on the teachings of St. Ignatius Loyola, the founder of the Jesuit order. Jesuits, in case you did not know have a very storied and in some cases, sinister history since they have always been considered to be the Catholic Church’s “Commandos”. They were usually the first ones to go into new territories (and haul everything back to the Vatican Library and archives and God only knows the amazing secrets that are still hiding there). St. Ignatius’s writings are extremely dense and difficult to decipher, unless you’re in theological studies or in seminary. The books I received are much easier and are more accessible interpretations of the original work and I might add, extremely helpful. Whether you want to call them demons, reptilians, archons, djinns, the books pretty much give you a 14-point plan tool-kit to figure out what might be influencing you and your thinking at any given moment.

It’s all about balancing the inner world with the outer one.

This reminds me a lot of the interior work I usually cover in yoga within my own practice, when you ask yourself ‘Where is this coming from?” “What is causing this?” with *this* being a particular feeling, a sudden change of heart, a source of discomfort or even pain. To Ignatius’ credit, he is extremely logical and Spock-like in his laying out of the facts and to those of you who already do a lot of interior work, this is a very helpful guide. For those of you who have never done this sort of work, it’s a great primer. 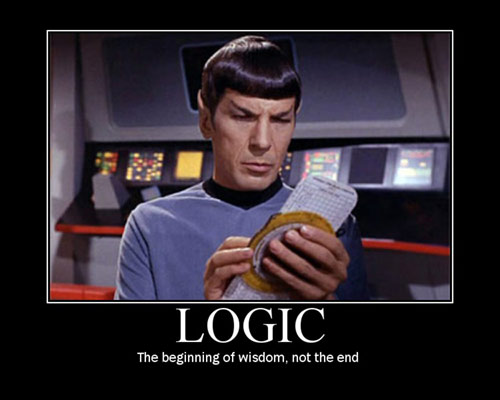 The 14 points are quite lengthy and the bulk of the book were examples to illustrate those points and there is a lot of Catholic jargon but it all of it boils down to this:
When you do something, when you say something, when you act in any given situation, what are you feeling either behind the motivation or afterwards? Ignatius points out when you ask most people that question, they usually are so disconnected from themselves or in such a reactive state, that the answer is usually either “Nothing” or “I don’t know” and *this* is precisely the biggest danger because if you don’t know what you’re feeling, then it makes it all the more difficult to understand the origin of those feelings and thoughts.

When you do or say something, does it make you feel happy? Free? Warm inside? Open? At peace? Serene? What about when you’ve made a decision on something? Is there churning in the stomach? Do you feel unsettled? Some restriction in you? Tightness? Fear? Anger? Wound up? Your answer will tell you what and where it’s really coming from in origin. Which outcome will bring you to a place of peace? Which outcome leaves a sticky residue of some sort? Ignatius also points out that the burden of responsibility in figuring this stuff out falls on each individual, no counsellor, therapist, priest, pastor or deacon can tell you what you’re feeling. Only you can. 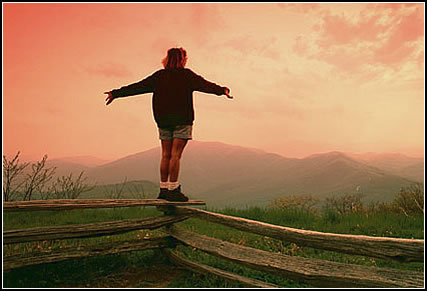 What does all this have to do with the Ascension process? Ignatius’ discernment of spirits has implications to it. He points out that ultimately the spiritual life is the one which will give you true freedom in the long run (I don’t agree with his interpretation of a “spiritual life” since it’s based a medieval, patriarchal form of Catholicism but I get what he’s saying. To each their own.)
Regarding Ascension, truth be told I think it’s already happened and like Ignatius’ question on feelings, it also comes down to this question? Do you want to follow a spiritual, more fluid path or a materialistic path with regimented rules and laws to follow? People who have chosen the spiritual path have a head start in some ways, they are going to have an easier time riding that shift. The ones who are on a materialistic path and decide to go deeper on that path are going to have a rougher ride as this shift continues and these newer energies become more pronounced.  This shift is about unveiling the truth and the movement towards spirit. As any teaching will tell you, we’re spirit or consciousness in flesh. We’re just trying to go back to our real state 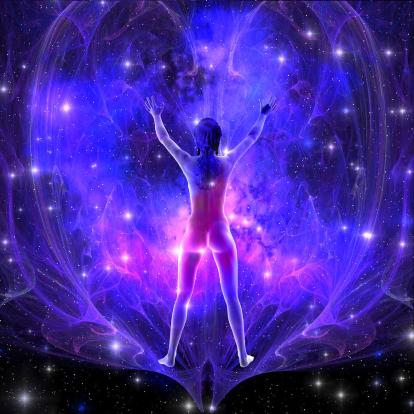 2 thoughts on “And the band played on”