“Many students, especially those who are poor, intuitively know what the schools do for them. They school them to confuse process and substance. Once these become blurred, a new logic is assumed: the more treatment there is, the better are the results; or, escalation leads to success. The pupil is thereby “schooled” to confuse teaching with learning, grade advancement with education, a diploma with competence, and fluency with the ability to say something new. His imagination is “schooled” to accept service in place of value. Medical treatment is mistaken for health care, social work for the improvement of community life, police protection for safety, military poise for national security, the rat race for productive work. Health, learning, dignity, independence, and creative endeavour are defined as little more than the performance of the institutions which claim to serve these ends, and their improvement is made to depend on allocating more resources to the management of hospitals, schools, and other agencies in question. ”

I’ve always been a bit of an eclectic.
I think it might have started in high-school. I was somehow “saved’ by my older cousins who were about 7-8 years older than me and thanks to them, when I was 7, I was listening to David Bowie, T-Rex, Roxy Music, ELO and AC/DC. By the time I was 11, I was listening to U2 (long before the “Joshua Tree” and before Bono became a pompous ass) and by the time I entered my teen years and the hellish suburban kids I had to go to high school with who were busy listening to Madonna and New Kids on the Block, I was already knee-deep into what was then considered, “underground and alternative” musical acts like The Smiths, Bauhaus, New Order and of course Depeche Mode.

This spilled over into everything else. In my 15-year-old mind, I figured if what was considered “popular” in music was such crap, and alternative music was so much better, then this principle had to hold in other spheres of human creativity and endeavor like film, literature, news outlets, books, writers, politics, fashion, design, art etc. In hindsight, I was right. So whenever I hear someone contemporary cite an intellectual, or a book or an idea which is either forgotten about, retired, out of fashion, out of print, hard-to-find or long-dead, I’m suddenly fascinated and want to know more.

Hermes silk scarves START at $500 each. Each season they make a limited number of each design which are usually pretty cool plus they literally never go out of style. This one commemorating Quebec is now a collector’s item. Good luck ever finding one on the cheap.

Maybe it’s because they aren’t as accessible or as ubiquitous as Kim Kardashian’s ass, but growing up the geek that I was (and am) I always found that thinkers of yore sometimes said the best truths simply and didn’t need every social media site and gizmo under the sun to say it. Quite often they also had great ideas and solutions to problems which no one knew about nor heard about but for whatever reason, everyone these days, particularly young people feel the need to re-invent the wheel when there are hundreds of ideas around which with a little research, reading, understanding, maybe some tweaking and implementation would be just enough to get us to the next stepping stone. (Wouldn’t it be great if someone somewhere created a bank of ideas so that people know where to look for this stuff the world over?).

I also do think there is something sinister at work. When a public intellectual is *too* good, if their ideas are *too* amazing and more importantly may actually work in real life, they are quite often deemed as “dangerous”. I do think The Powers That Be are very good at marginalizing them, demonizing them, silencing them and making their work hard to find and forgotten so that the public remain in ignorance. The thought police didn’t end with George Orwell folks. Look at the treatment of original, intellectuals like Noam Chomsky and Norman Finkelstein and you’ll see what I mean.

The term “inverted totalitarianism”  is used to describe what the government of the US (and its allies I would also add) is on its way to becoming if they haven’t already. The gist of it is this: inverted totalitarianism is described as a system where corporations have corrupted and subverted democracy and where economics trumps politics. In inverted totalitarianism, every natural resource and every living being is commodified and exploited to collapse as the citizenry are lulled and manipulated into surrendering their liberties and their participation in government through excess consumerism and sensationalism.

Chris Hedges recently sat down with retired professor Sheldon Wolin . It’s an 8 part interview and clocks in at 3 hours. Still, it’s probably one of the most illuminating and important discussions of modern Western political history about WHY everything is wrong nowadays I’ve seen in a long, long time. If you want to add some new brain cells, it is well worth a watch.

In the past 2 decades, particularly in North America, more funding has shifted towards faculties of Management, Business, Law, Dentistry and Medicine and why universities left and right are downsizing or outright getting rid of things like Arts (history, anthropology, philosophy, classics), Social Sciences, Liberal Arts and Religious Studies, Cultural Studies, etc. The academy was once a place where you went to get an education and broaden your horizons. Now, it’s a place where you go to get a skill-set. Simplistically, an education meant gaining knowledge (and maybe if you’re lucky, some wisdom) for the sake of gaining knowledge and building up on that so that our knowledge base would expand and grow. A skill-set is something which is usually marketable and used to serve the market economy, like data. It has become corporatized.

Cultural Studies professor Henry Giroux explains it beautifully above. He finally had enough of it in the States and left Penn State and made the move up to Canada. If you want to learn something new or read groovy books your professor never mentioned, you basically have no choice these days except to go out there and read them on your own. To paraphrase Giroux, schools (and all formal institutions I’d add) have now become “dis-imagination zones”.
Quick example: How many of you ever heard of Ivan Illich or Jacques Ellul? Have you ever read them? Did any of your teachers or profs ever mention them? Do you know anything about them?
Don’t feel bad because I didn’t either.

I recently came across those names thanks to some interviews I watched of film maker and former monk Godfrey Reggio, who did the Qatsi film trilogy (Koyaanisqatsi, Powaqqatsi, and Naqoyqatsi ). Upon further investigation and reading, I was gobsmacked. Both Ivan Illich and Jacques Ellul were deeply influenced by Christian theology and spirituality but eventually left them behind to become social thinkers and theorists. Jacques Ellul became a big-time Christian anarchist thinker while Illich became a very influential social thinker in leftist circles, particularly in Latin America. 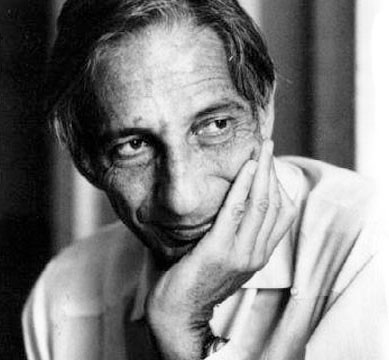 Ivan Illich in particular fascinates me. A full-on polymath and polyglot who lived the life of a wandering ascetic monk, fluent in 10 languages (including Ancient Greek and Latin) and wrote in 4 of them, Illich wrote on topics as varied as education to medicine to law and was described by some as “an archaeologist of ideas”. The central theme in all his writings was basically “How do we make things better and how do we make them work, keeping in mind the human element here?” As a former priest, he never lost sight of the spiritual element to these questions. His obituary in The Guardian sums it up including the fact that, like Noam Chomsky these days, he was a bit of a “problematic” public intellectual in his day to the establishment especially to his higher-ups at the Vatican. 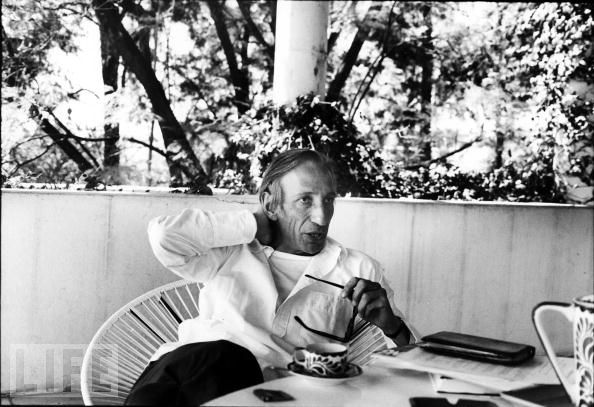 He’s mostly remembered for his books, ” Deschooling Society“, “Tools for Conviviality“, “Medical Nemesis“, “The Right to Useful Unemployment and its Professional Enemies“, “Celebration of Awareness” as well as establishing the Centro Intercultural de Documentación (CIDOC) in Mexico. From 1961 – 1976, CIDOC attracted quite a number of intellectuals from all over the world particularly those who were leftist or anarchist in leaning a sort of anti-university. It became a good place to exchange ideas. Too good in fact. With CIA input and the Vatican, it was eventually shut down (of course). The gist of all of Illich’s work was that by dissecting institutions and analyzing how they have been corrupted, we can come to understand why institutions like medicine and education have a tendency to operate and work in ways which are opposite to their original purpose and therefore become counter-productive. Once you understand why something doesn’t work, you then know what NOT TO DO.

For those of you who like to read, are in activist circles or just simply like to think about how to build a better mouse-trap, the likes of Illich, Ellul, Giroux and Wolin are a godsend.
In some ways I’m glad I DIDN’T read them in school. To have done so probably would have defeated the purpose of their writings anyway. 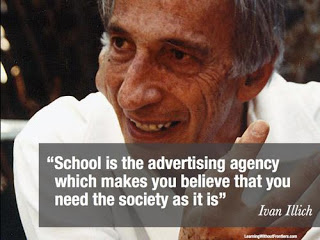 Categories: Ch-ch-ch-changes, Politico, Pop culture, Raise your EQ, Think like the Illuminati, This is why the planet is screwed up | Tags: alternative thinking, alternative ways of being, Commodification of life, corporatization of schools, de-professionalism, deschooling society, Henry Giroux, Ivan Illich, Jacques Ellul | 5 Comments

5 thoughts on “Dis-Imagination and De-Schooling Zones”