The Power of The Small

Whenever something is wrong, it means something is too big. If the stars in the sky or the atoms of uranium disintegrate in spontaneous explosion, it is not because their substance has lost its balance. It is because matter has attempted to expand beyond the impassable barriers set to every accumulation. Their mass has become too big. If the human body becomes diseased, it is,  as in cancer, because a cell, or a group of cells, has begun to outgrow its allotted narrow limits. And if the body of a people becomes diseased with the fever of aggression, brutality, collectivism, or massive idiocy, it is not because it has fallen victim to bad leadership or mental derangement. It is because human beings, so charming as individuals or in small aggregations, have been welded into over-concentrated social units such as mobs, unions, cartels, or great powers.”

– Leopold Kohr, “The Breakdown of Nations”
What Professor Kohr warned us of 50 years ago has now, I think, come to pass or at the very least, it’s a symptom of what I’ve been noticing lately on a number of different fronts. Kohr was one of the fathers of the “small is beautiful” movement and increasingly this idea isn’t just applicable to nation-states (which should be abolished anyway IMHO), mega-states, empires, mega-cities  and mega regional trading blocs (i.e EU, AU and the possible North America Union which some folks have been warning and talking about for years) but to banking, corporations, our consumption patterns, our energetic footprint, the waste we produce and yes, even ourselves.
Black Friday was a couple of weeks ago and what once started as a strictly American phenomena has now unfortunately spilled over into Canada and the UK. Just watching the clips of mobs of people rushing into stores, attacking each other and even in several cases, killing each other, for a bunch of crappy , cheap stuff is enough to make even the most jaded person’s stomach turn. It’s easy to say and point out that this only happens in the lower rungs of society at places like Wal-Mart or Tesco but I’ve observed this mob-like vulture attitude among well-heeled women in upscale department stores as well. Boxing Day is another day I barely venture out for  – I try to do all my shopping online now just to avoid crowds. It just makes me wonder what the hell has happened to us? Are we in some kind of collective haze or coma where we can only feel alive by over-consumption?  Have mega-box stores and shopping complexes become our new temples? 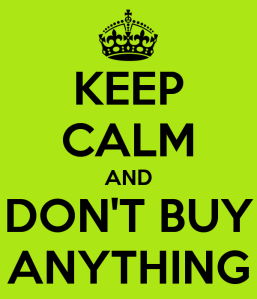 (BTW Here’s a small trick for some of you stylish fashionista or frugal types:  I usually do my homework to figure out what I REALLY need.  Scour the secondhand and thrift shops  to see if there’s a model or copy there (You would be very surprised to find out what people get rid of these days – Last year I  scored a brand-spanking new Le Creuset enameled Dutch oven, the kind that lasts lifetimes, with the sticker still on it. Retail $400. I got it for $5. ). I then go long in advance, to stores, boutiques and such for stuff that I really need, pretend I’m going to buy something, try on the models of jeans or sweaters I want, to get my perfect size, take note of the brand, manufacturer, name and model of items, take pictures on my phone,  feign regret to the sales girl that nothing fits, read product user  reviews at places like Consumer Reports, Amazon or Makeupalley.com and then go on ebay, etsy or the outnet and buy it or something very similar usually at a much, MUCH cheaper price. It’s my way of sticking it to “the man” and it works like a charm every time  😀 )

These are seriously taking off now. Though I’m not sure how you can swing it if you’re raising a family.

There is also the tiny home movement which I think is just fabulous. It gets rid of mortgages, frees people up from debt and forces a truly minimalist lifestyle where instead of being preoccupied with finances and keeping up with the Jones, you can now put your attention towards things that matter.  I really don’t understand why on earth anyone would need a McMansion. Honestly, what do you do with 3 living rooms????
I think the urban agriculture and community sponsored agricultural (CSA) are also a part of that trend. Instead of giant farms run by evil multinational conglomerates like Monsanto, producing GMO crops, it’s a movement towards growing and eating locally, making better use of our urban spaces and land, teaching people especially kids, where food really comes from and eating better quality, nutrient-dense food. 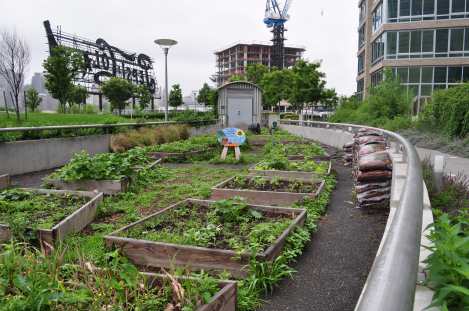 Speaking of food, I also think many of our illnesses comes from our diets. I just finished reading Dr. T. Colin Campbell’s blockbuster best-seller “The China Study” and I think he makes an extremely compelling argument. Simply put, our affluence is literally killing us, particularly our meat-based protein and dairy consumption. We’re eating too much of the wrong foods. He compared the diets of Americans to the Chinese and guess what? They hardly have the same incidences of illness, including cancer, heart disease, obesity, Alzheimer’s,  immune system illnesses and  nervous system illnesses as we do. Dr. Campbell basically outlines the benefits of a largely vegan diet but his 80-10-5-5 rule is just as effective (80% fruits and vegetables, 10% grains, 5% meat-based protein, 5% plant-based protein).

If you seriously want to transform your life in an easy way, you cannot beat making Mason Jar Salads. I make these kinds of salads every Sunday now and they keep the whole week in the fridge. Talk about an easy take-to-work lunch! (Photo from organizeyourselfskinny.com)

Banksters complain that the banks are “too big to fail” and to some degree they are right. Bureaucratically bloated organizations like central banks often are. When you place all your eggs in one basket and if the basket falls, there go all your eggs. I know in light of the 2008 financial crisis, lots of people started taking their money out of banks and such and placed it in spots like farmer’s credit unions and cooperatives. I think it’s a smart move. Instead of having giant transnational banks, tying up everyone’s cash, small community-based financial institutions are probably going to end up giving you better service and more stability in the long-run.

Spiritually, if there are any traditions which champions the cause of the small, I would say it’s Taoism and the very early Christian Church. Early Christianity was actually quite revolutionary and subversive  in face of the giant Roman Empire. It was about working with the poor and disenfranchised. I mean you read about old JC and who did he hang out with? Lepers, prostitutes, the disabled, the poor and the sick.  It’s something which bloated organizations like the Vatican, the (very rich) Episcopal/Anglican Church  and some of these strange and extremely wealthy  American denominations like Foursquare International (which many CIA members are a part of) need to think about. 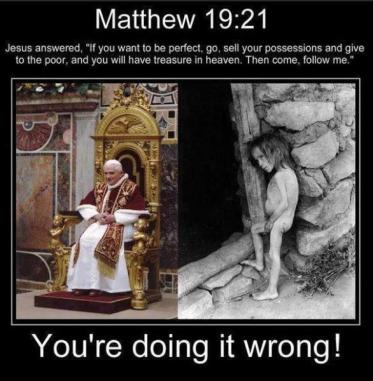 Taoism also worked along similar principles. It originally championed the causes of the elderly, the poor, women and children in face of the warlords who ruled ancient Confucian China. However even in its practices and teachings,  Taoism was always about realizing that in  becoming smaller, you become stronger and wiser. It’s teachings are full of anecdotes to get this idea across like the virtues of being a small, flexible blade of grass instead on an ancient, giant old tree. The blade of grass makes it through the storm untouched but the rigid tree doesn’t.
I’m going to close off with a quote from Benjamin Hoff’s Taoist classic, “The Te of Piglet”
“It is very hard to be brave,” said Piglet, sniffing slightly, “when you’re only a Very Small Animal.”
Rabbit, who had begun to write very busily, looked up and said: “It is because you are a very small animal that you will be Useful in the adventure before us.” 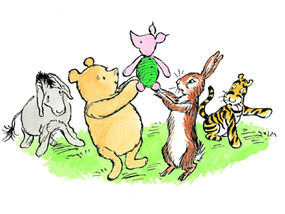 8 thoughts on “The Power of The Small”