“The boiling frog story is a widespread anecdote describing a frog slowly being boiled alive. The premise is that if a frog is placed in boiling water, it will jump out, but if it is placed in cold water that is slowly heated, it will not perceive the danger and will be cooked to death. The story is often used as a metaphor for the inability or unwillingness of people to react to significant changes that occur gradually.”

Last night I went to see uber-journalist Glenn Greenwald at McGill University. Greenwald, for those of you who may not know, is the journalist and activist, along with Laura Poitras who blew open the Edward Snowden story and showed that most Western governments and alphabet agencies are spying on their own citizens and sharing information with each other particularly the “Five Eyes” nations, the US, Britain, Canada, Australia and New Zealand (funny, they’re all Anglo-Saxon – why is that?)

Greenwald’s talk was quite timely particularly in light of the events which took place this past week in Canada. Canada has now experienced its first “terrorist” attack involving “radicalized Muslims“. Many discussion forums have been in overdrive and the consensus among some that it is a false-flag attack. Too many loose ends, too many inconsistencies.

In other words, the timing of it has raised suspicions given that Stephen Harper is now committing troops to Iraq to fight ISIS for the first time ever, and that it is a deeply unpopular motion among many Canadians. However, if you have a few events like this past week, you ferment fear and war-mongering and suddenly an idea which seemed like a bad one just last week to many Canadians suddenly becomes a palatable one. Also if you have an election looming next year. it always helps to buffer up your profile among voters, no doubt.

I make no secret of the fact that I do not like conservatives and I dislike Stephen Harper as a person and as a leader. He’s not a leader, he’s a technocrat and a Machiavellian one at that (and he’s about as charismatic as a soulless robot that eats far too many jelly donuts for his own good).

Stephen Harper at far left. Dude, you seriously need to do something about that spare tire. Did you know that belly fat increases your chances of Type II Diabetes and heart disease?

Glenn brought up the boiling frogs scenario last night because I think it is an apt description of what many, many people are now experiencing whether it’s Canada (and stupid talk about bringing back the War Measures Act —> no fucking way) or the US (and the Patriot Act which Americans have been under all these years).

People give up their privacy in the name of security and little by little, without even noticing they one day wake up and realize it’s all gone and then cry wolf, but by then, it’s too late. Their sense of security was an illusion and the people who promised it, at the end of the day, really never cared about you. Glenn also pointed out that laws are useless now. Governments don’t have to answer to any law anymore since “The Law” as we know it can change at the drop of the hat and it’s designed to protect the interests of the powerful and further disenfranchise the powerless.

I’d like to think that people are smarter than that. That if they had all the correct facts in front of them, free of propaganda, secrets and biases, they would make the right decision but somehow, fear always seems to trump reason. It’s instinct over the mind. People would rather like to stick to their comforting old illusions rather than deal with uncomfortable new truths. Perhaps cognitive dissonance has something to do with it but I think, it also boils down to self-preservation. On a spiritual level, I find that sad, because it shows we still haven’t learned how to grow out of ourselves yet.

George Orwell’s ghost must be shaking his head in disgust somewhere. 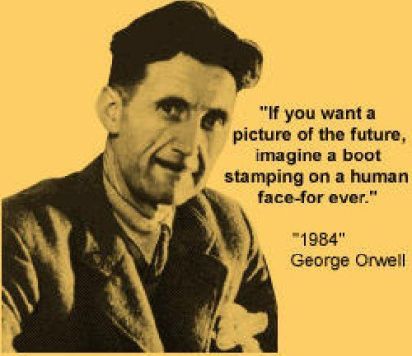