I can be a really bad chronicler at times. Countless spiritual traditions tell us that many of us get messages from the Spirit World every night in our sleep through or dreams and that it’s a question of training ourselves of writing everything down when we wake up while the details are still fresh in our mind.

I’ve tried. I just can’t do it since I am not and never will be a morning person. My biorhythms veer towards the evening and night so come morning time, I’m too groggy and busy stumbling towards my morning cup of tea, never mind whipping out a notebook and remembering last night’s adventures in dreamland.
However, I have had incidences of wicked deja-vu. Seeing something which, upon reflection, was something I already saw in the dream state a few days earlier.  I’ve also been lucky in the sense that I’ve never had nightmares. Maybe when I was a kid and watched too many Godzilla or Ray Harryhausen movies and would run into my parents’ room in the middle of the night but beyond that, I can’t complain.

This caused nightmares when I was like, 5 years old

One writer who has admitted that she was regularly blessed with beautiful dreams was the Danish writer, Isak Dinesen aka Baroness Karen Blixen. Blixen was the author of such classics like “Out of Africa” and “Babette’s Feast”  and if you love to read good literature as much as I do, those two are “musts” (and the film versions do no justice to them at all).

Isak Dinesen, at a younger time in her life

This is a strong dream-like quality to her writing, particularly in it’s richness and if you read her body of work like “Anecdotes of Destiny” or “Seven Gothic Tales”, it’s easy to see how coming out of her books is like waking up from a beautiful dream. In my opinion, even if she just wrote 7 books, she was robbed of the Nobel Prize in Literature, the first time by another big-game hunter, Ernest Hemingway, who even admitted to her, that she deserved it more than he did and the second time by Albert Camus.

I bring up Blixen because of an incident she recounted in her novella, “Shadows on the Grass” :
When in the thirties I was staying in the south of England with Denys’ (Finch-Hatton) brother, the Earl of Winchilsea, the painter John (Glyn Warren) Philpot came down to paint the portrait of my hostess, who was very lovely.  He had travelled much in North Africa, and on an afternoon when we were walking together in the park he recounted to me an experience of his from there.

Kirby Hall, Home of the Earls of Winchelsea

In the First World War, he said, he had had a shell-shock or a nervous breakdown; he would never feel sure that he was doing what he ought to do. 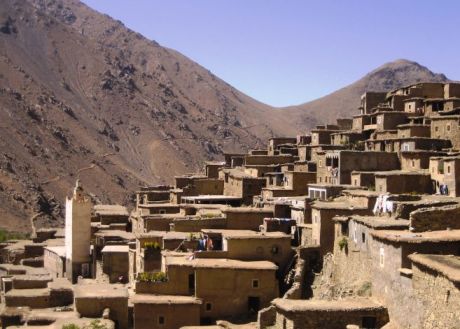 “It happened by then that I and my African servant in our travels in Morocco came to a small town or village. I cannot really describe the place to you, it looked like any other North African village. It stood in a flat plain, and in itself, was nothing but a number of mud-built huts with an old, broad mud-built wall round it. The only particular thing that I remember about it is its great multitude of storks, a stork’s nest on almost every house. But at that moment when I had come through the gate in the wall,  felt that this was a place of refuge. There came upon me a strange, blissful, calm, a happiness like what you feel when a high fever leaves you. “Here”, I thought, “one can remain.”  “And as now I had stayed in the village for a fortnight, all the time in that same sweet peace of soul and giving no thought to the past or the future, on a day when I was once more painting a picture, an old man, am imam , came up and spoke to me.”I hear from your servant,” he said,”that  you have finished your wanderings and will stay with us, since here you have found rest.” I answered him that it was as he said, but that I could not explain to myself why it should be so.

“Master,” said the old man,” I shall explain to you. There is something special about our village, things have happened here that have happened nowhere else. It came about, not when I was a boy myself but when my father was a boy of twelve, and he has related it to me as it happened. Turn your eyes to the gate in the wall behind us. Above it you will see a ledge, where two men can sit, for in the old days watchmen were here looking out for foes that might approach across the plain. To this very ledge above the gate, came the Prophet (Mohammed) himself and your Prophet, Jesus Christ. They met here to talk together of man’s lot on Earth and the means by which the people of the earth might be helped. Those standing down below could not hear what they said to one another. But they could see the Prophet, as he explained his thoughts, striking his hand against his knee, and thereupon  Jesus Christ lifting his hand and answering him. They sat there, deep in talk, till night fell and the people could no longer see them. And it is from that time Master, that our village has got peace of heart to give away. “I wonder,” said Mr. Philpot, “whether a clergyman from the Church of England would have told that tale.”

Like I wrote earlier, I ‘m very bad at recalling my dreams. With few exceptions, there have been times which an entire letter with the most perfect wording was suddenly sitting in my head, a crucial letter which I needed to send to someone. Or plans I needed to act on immediately. I had one dream while I was living in Turkey which I still cannot forget. It was *that* vivid and *that* real and sitting down to write it, came effortlessly. I don’t know what it means, but there is a symbolic message there and like Dinesen’s excerpt above, the similarities are obvious.

I dreamt that dozens of people saw Muhammad AND Jesus in Central Park, New York City at the same time, at two different ends of the park.

The group of people who saw Muhammad, saw him walk on water and apparently he had all the signs of being *the* Muhammad, according to one eyewitness, who himself was an Islamic scholar and a devout one at that. His name was Aziz, I think. Suddenly, tents were going up on the spot he had been and all the witnesses, Muslim and non-Muslim alike, suddenly had become men and women of contemplation. They renounced their old lives as businesspeople, students, whatever, to merely devote their life to study and think about the Infinite.

As for the other, second group that saw Jesus, well this being New York City in the 21st century, needless to say these are people who are a little aggressive, jaded, cynical and sceptical.   So they needed stronger proof than walking on water. There was a rain of coins, twice. The first time, the coins were a coppery colour, but they were not pennies. They were Abraham Lincoln two-dollar coins, a very , very limited rare edition. That wasn’t enough proof. Then there was a second rain, this time of platinum coins. It was a Jefferson three-dollar coin which has never been made in the first place. Finally everyone caught on, it really was Jesus, but like Muhammad, the two of them disappeared as mysteriously as they appeared.

In my dream, I showed up in the park immediately after the incidents, I didn’t see the actual events. It was not quite yet pandamonium with religious fanatics, the clergy, scientists and reporters but the build-up of the oncoming media frenzy had just started. The park was already full of hundreds of people, onlookers and curiosity mongers, people running everywhere, crying, laughing, chaos.

I remember walking down one path and seeing these two hacky-sack looking guys, sitting cross-legged on the grass merely staring at the two stacks of coins they had collected in front of them, one stack of each denomination. The guys were totally out of it, in a daze. I looked at each coin. They were real alright, but somehow they looked like they were already starting to melt.

What could all this mean?