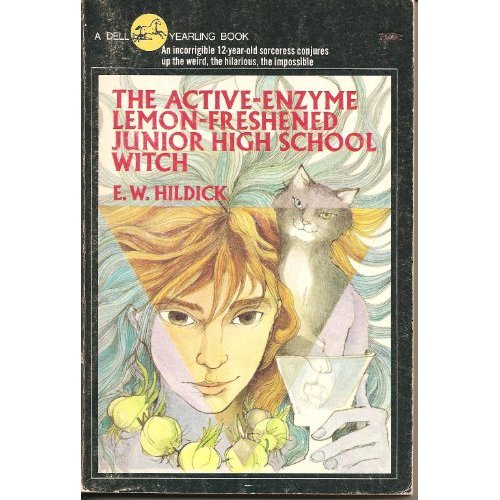 It should come as no surprise to regular readers of my blog, that I was a pretty geeky kid and one who normally had my nose buried deep within a book most of the time. I was lucky enough to grow up in a neighborhood which has a municipal library which has the highest per capita use in all of Canada outside of a university, which meant their collection was excellent and I had access to some pretty nifty books from the get-go. 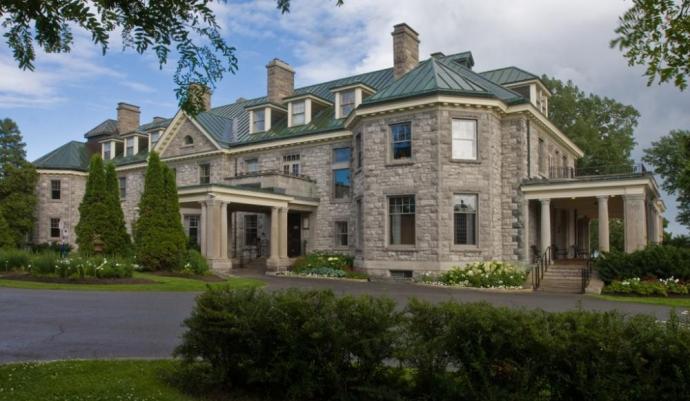 Stewart Hall Library and Cultural Center    Someone donated this mansion to the city and it has been a public library for over 50 years now. Amazing reading rooms.

One book I remember vividly reading and enjoying  was “The Active Enzyme Lemon Freshened Junior High School Witch”. This was the early 1980s when I was in elementary school and many young people’s books from the 1970s were still on the shelves and one of the biggest trends during the 1970s was the introduction of some occult and supernatural ideas into children’s movies (i.e Freaky Friday) and children’s literature.

I think it was after reading the aforementioned book which kicked off my interest in spell-casting and ritual. If you really sit down and think about it, practically anything and everything can be deemed as spell-casting and ritual whether it’s the Catholic Solemn Mass or watching a goat having its throat slit during Kurbani on a cold Quebec farm (which I had to watch my uncle do several times as a kid), for the Islamic festival of Sacrifice. Formal religion sanctions some rituals and then deems others as abhorrent because it doesn’t jive with its own theology. Kurbani might freak out some Hindus but then the idea of ingesting someone’s blood and flesh, even in symbolic form, during the High Mass may freak out some Muslims. It’s all relative and highly, highly subjective to cultural and religious norms.

You do realize, that this is a form of spell-casting as well, right?

To me, all types of rituals are nothing more than a different form of prayer and/or meditation. Some people can sit still for hours and meditate on emptiness or on a statue of a fat Buddha or hold a yoga pose for hours.

Other people are twitchier than that and need the use of props and ritual to ground themselves and find it easier that way to find that quiet place in themselves.
It all really boils down to intention.
What are you really doing this for?
Is it for yourself, so that you can become richer, better-looking and happier or is it for others?
I bring up the topic of rituals and spell-casting because of some strange events of late. The Satanic New Year is coming up on February 1 and apparently a vial of Pope John Paul II’s blood has been stolen. It is suspected that Satanists are involved according to Italian authorities.

A vial of his blood has been stolen. Strange timing.

Also last week’s Grammy performance by Katy Perry did not help matters. The conspiracy research websites and boards are going crazy over what Katy Perry and Beyoncé were up to. Katy Perry in essence recreated a Black Witch’s Sabbath which led to Christian singer and nominee Natalie Grant walking out of the show. Many parents got hot and bothered by Beyoncé’s performance. (IMHO, her performance was all about selling crack, nothing more.)

Beyonce at the Grammys

I don’t have a doubt that there are evil things walking this earth. I watched this documentary yesterday from Vice TV on the “World Most Dangerous Drug”,   scopolamine,   which also has the ominous name of “Devil’s Breath” from Columbia. It has the ability to render people to lose all memory, while remaining conscious and becoming docile and submissive. In other words you start taking orders from others and don’t look drunk or passed out so no one suspects anything. Already horror stories of people getting drugged at clubs and waking up the next morning and missing an organ or finding themselves brutally raped and their homes cleaned out by thieves or having their bank accounts and credit card limits cleared out abound.
The moment we lose our free will is the moment we will lose our humanity. If this drug is a harbinger of things to come and Heaven forbid, leaves Columbia and spreads to major metropolitan areas around the world and governments start using it, you know we will be up the creek without a paddle in sight.

It’s not all bad even if we live in a world which is increasingly focused on the self and nothing else and forget that there are people who are far more selfless than we can imagine. Take for instance aging old Catholic nuns, fewer and fewer each year, who do nothing but pray for the salvation of the world in lonely, isolated convents the world over. That counts for something in my book.

Lately, I’ve been reading up on the works of Judika Illes and have been working with some of the spells, particularly with a plant called the Rose of Jericho aka the Resurrection Plant. The plant is originally from the Mexican desert and has that name because of its ability to wither down and then when submerged under water, to become green again. Rose of Jericho water is also considered a powerful talisman and the plant medicine is used to help bring luck, grace and to help revive things back to life. It is a POSITIVE medicine and it cannot be used for anything bad. If you try, it won’t work. Simple as that.
If a plant could sing, I’m sure the Rose of Jericho’s anthem would be from my favorite 1970s band, Electric Light Orchestra’s “Shine a Little Love”
“You Shine a little love on my life
You Shine a little love on my life
You Shine a little love on my life and let me see”
Categories: Ascension, Ch-ch-ch-changes, Conspirio, Pop culture, Raise your EQ, Shift of the Ages effects, Think like the Illuminati, This is why the planet is screwed up | Tags: Drugs, plant magick, rituals, Rose of Jericho, Satanism, Scopolamine, Spell casting, Witchcraft, Working with Light | 6 Comments