“The Rainbow Tribe consists of everyone, of native and non-native blood, that believe that in our coming together as a tribe of people, of all colors ,that we will make the one true tribe of two-legged ones that we are.  The Rainbow Tribe is actually many small groups that are coming together in understanding and celebration of the diversity of people and who understand their importance and their obligation of love to the Mother Earth and all that is here.”

I have steadily been watching various discussions online about the lack of inclusion in the yoga world this past year. Anarchist yogis “The Babarazzi” does a fantastic job of periodically putting out wonderful, thought-provoking posts on this issue. What comes to mind was a post they did back in October called “Is De-Culturing Yoga an Act of Good Faith or a Promotion of Xenophobic Ideology? /// A Light and Easy Subject”.

Taking the “Indian-ness” out of yoga to make it more palatable to the Venice Beach crowd is not cool. This is a form of cultural appropriation

Moonlit Moth, by blogger Andrea MacDonald based out of Vancouver is also taking an anti-imperialistic stance in taking on the issues of accessibility and anti-oppression in yoga.
Andrea writes:
“I strive to make my classes anti-oppressive. By anti-oppressive I mean anti-racist, queer, trans and LGBTQ friendly, patriarchy resistant, anti-colonial, body and ability positive as well as affordable for my students and sustainable for me as the teacher. In order to create a safe space for all my students I will do my best to address oppressive language and behaviour in the studio. Usually I find open, honest discussion can help make the classes safer for everyone involved.”
Kula Yoga Toronto is also offering “Brown Girl Yoga” and “Queer Yoga”  in an attempt to reach out to those communities and create a space where others can feel comfortable. 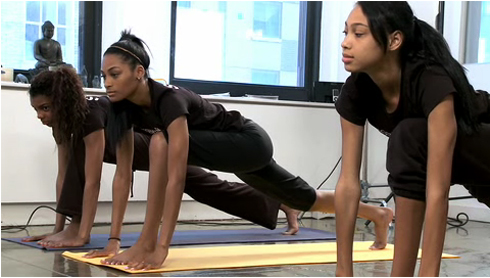 I applaud all these initiatives and discussions and while I think these issues of inclusion, diversity and accessibility are now being talked about more than ever online and off and are a far cry from that fall evening back in 2002 when I first stepped into a Bikram yoga studio and found myself as the only person of color in a roomful of pony-tailed golden boys with wash-board abs and a host of tall, lithe Caucasian trophy wives  discussing their Filipino nannies in the change room, I still think there is a long way to go.  I did not even have to look further than to scroll down  to the comments section of my article on EJ to see how far the so-called “enlightened” yoga crowd have to go. 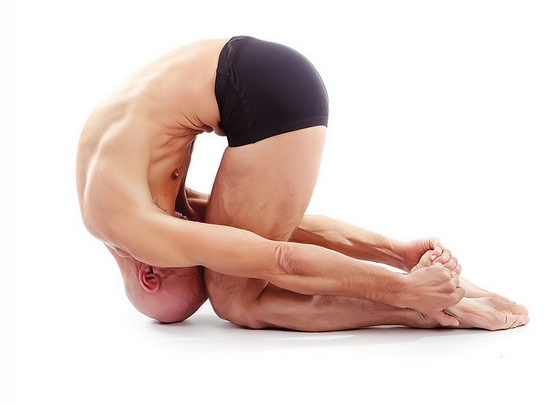 Rabbit Pose – Do you honestly think anyone can do this pose on their first time ever doing yoga?

White entitlement and white privilege are in essence, almost taken for granted. They have been institutionally sanctioned for a couple of hundred years now, mostly in advent of  European imperialism and colonialism. It’s only maybe in the last 50 years serious questioning and scholarship has started to take place, mostly in academia and it has slowly started to filter down into mainstream culture.

That’s beyond the scope of this blog post but any discussion of race is going to cause fireworks to go off no matter what. Someone always ends up getting pissed off. People don’t like to think of themselves as racist or bigoted and they certainly don’t like it being pointed out to them even if it is done unconsciously.  And it would seem yogis, for all their talk of oneness and spiritualism, they positively hate to have it pointed out to them and have their artificial balloons of security and illusion popped especially by someone who is not white.

One of the things I had to undergo when I did my stint as a spiritual caregiver at a hospital trauma unit as well as when I studied cross-cultural management for my undergraduate degree was something called diversity training. In essence, it’s about learning how to deal with people who are different from you in ethnicity, color, socio-economic background and culture without disrespecting them, their heritage, background etc, being mindful of the differences in order to bring out everyone’s best for the sake of improving overall teamwork and outcomes. In all honesty, I think more studios, more instructors, more training centers need to start including this as well, if all this talk of inclusion and plurality is to amount to anything.

I had to watch this film in the course of my studies. “The Color of Fear” is now considered a classic in diversity training and cross-cultural management seminars around the world and I think it merits several viewings. There are some comments alone which will force you to stop it and look at yourself and your own reactions. I think Victor Lewis probably has the most powerful voice here in expressing why some people are more equal than others. I warn you, it can be an uncomfortable watch but I think if we want that dream of a Rainbow Tribe to ever materialize, some hard questions and soul-searching needs to take place. This is as good as a beginning as anything else out there.
Categories: Ascension, Politico, Pop culture, Raise your EQ, Uncategorized, Yoga | Tags: Culture, diversity, plurality, Race relations, uncomfortable issues and questions, Yoga | 2 Comments