Some Mysticism in Some Films

The National Library and Archives of Quebec

One of the few benefits of living in Quebec is that it is easily the most leftist place in North America with strong socialist leanings. Yeah, our taxes are high and we have bad roads with winter potholes which will do a number on your car maintenance bills. However that also means extremely affordable university education, fantastic community services and wonderful public libraries with excellent collections in many languages with speedy inter-library loans.

It’s a very rare public library that can say it carries the entire catalogue of the Criterion Collection of DVDs. For those of you who aren’t film buffs, the Criterion Collection produces the most amazing versions of all those art house films you’ve read or heard about but never had the chance to watch. Those films and directors which are often quoted by more mainstream movie directors or those covered in basic courses in film studies and communication, like Luchino Visconti, Akira Kurosawa, Ken Loach, Alex Cox and countless others. The Criterion DVDs also contain those extras like rare documentaries on the making of, interviews with surviving actors or directors.

Boss. The mystical poet of cinema, Andrei Tarkovsky. If Rumi had been a filmmaker, the closest approximation would have been Tarkovsky. His gravestone in Paris reads,”To the man who saw the Angel.”

You gain a special insight and understanding about the art form and a basic free education in film studies (Film was always considered an art form by the Europeans and more of a business by the Americans, with few exceptions which is why the “look” and message is so different.). Once you watch the masters at work, you begin to have the ability to discern when fifth-rate Hollywood directors try oh-so-hard to copy them or insert scenes in their films which have been “inspired” by the real maestros (and usually fall flat on their faces).

One thing the Americans could never do was portray spiritual and serious mystical ideas on film effectively. I don’t know why, maybe the puritanical religious history has something to do with it or the lack of exposure or understanding of religious traditions outside of the strictly Protestant/Catholic framework until fairly recently. When they do, it either comes across as New Age-y like “What Dreams May Come” or like “City of Angels” (an excretable version of the original German masterpiece “Wings of Desire”) or it has to be based on biblical or religious dogma like the more recent “Noah”. Mysticism, because it is so porous and open-ended, does not lend itself well to the medium of film.

When it’s done in the hands of directors, who themselves may have the best credentials technically but have low spiritual insight or maturity, the films usually fall flat like in the case of Martin Scorsese‘s “Kundun” (which is why I think he keeps repeating the same themes and keeps making the same gangster film all the time – he doesn’t have very much range IMHO).

Kundun (1997) a film about the Dalai Lama. Movie was nothing to write home about.

When it’s done right, the results are beyond fabulous and keep you running back for more.
The films can haunt you for days and more often than not, raises more questions, which then forces you to re-watch the film with these questions in mind – and the process keeps repeating itself from there. Andrei Tarkovsky’s entire body of work and especially “Andrei Rublev” (read the user reviews at the bottom), Wim Wender’s “Paris, Texas”, Louis Malle’s “My Dinner with Andre” or Krzysztof Kieslowski’s Decalogue, easily come to mind here.

Recently I stumbled on the works of British filmmakers Michael Powell and Emeric Pressburger aka “The Archers”. There has already been volumes written on them to say nothing of the countless PhD dissertations on their work, but what I would like to focus on is the almost-lyrical mysticism which seems to pervade their films, most notably in “The Life and Death of Colonel Blimp”, “I Know Where I’m Going”, “A Matter of Life and Death”, “Black Narcissus” and “The Red Shoes”.

Michael Powell and Emeric Pressburger at work. They had one of the most successful working partnerships in British film history 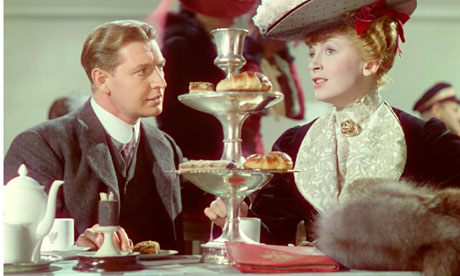 This is a film about missed chances, realizing the truth of the matter a little too late and looking back on life. For anyone who has had to live with regret and then had to make the best of it, the film will ring true especially for you. The film follows Major General Clive Wynne-Candy (Roger Livesey’s performance of a lifetime) from 1902 until 1942 and watches the changes in culture played out in the theatre of war. Particularly from when war was once fought by gentlemen to when war became an outlet for brutes.

Probably one of the best-looking close-up shots of an actor, ever. A gentleman, moments before his fight.

Powell and Pressburger took the piss out of war and the British idea of “empire building” and even had Winston Churchill and the British War office on their backs for making this film, particularly for showing up the humanity of a German highborn soldier. The war propagandists of the time just couldn’t take it because the film refused to take sides. This was a film which was not supposed to be made but 70 years later has finally been restored to its original form and is now becoming recognized as the masterpiece it was. An undercurrent theme of lost love also runs throughout the film. English actress Deborah Kerr plays 3 characters in this film, a different incarnation of Clive Wynne-Candy’s Twin Soul at different stages in his life. 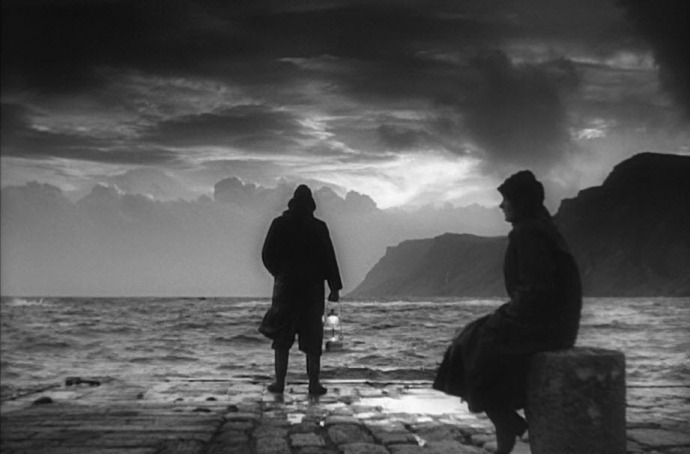 Looking out towards Kiloran from Mull.

A tale about Destiny, Fate and Love (and I capitalized those words on purpose here). Wendy Hiller plays Joan Webster, an ambitious young lady who is engaged to be married off to the much older but very wealthy industrialist Sir Robert Bellinger. The wedding is to take place on the remote Scottish island of Kiloran in the Western Hebrides and the only way to get there is to catch a boat from the island of Mull. Setback after setback hits Joan as a sudden storm and windy conditions prevent her from leaving Mull and Joan meets a dashing naval officer named Torquil MacNeil (again, Roger Livesey at his most handsome I find) who kindly offers her to stay at his friend’s home. 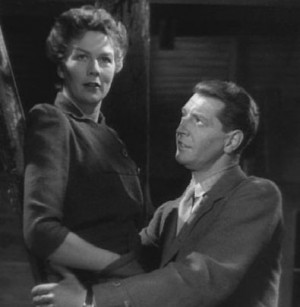 Captain MacNeil doesn’t have eyes for anyone else but for Joan.

The storm lasts a few days and with each passing day Joan and Torquil’s unsaid feelings for each other become deeper and more apparent. Joan, fearing that she is going to lose everything she has worked so hard for in her life if she stays any longer, tries to flee but Mother Nature, the Fates (and especially Captain MacNeil) have other ideas. Set against the harsh beauty of Northern Scotland, this film has a solid cult following and hundreds of fans of the film have made the trek to the filming locations over the years. No one can quite explain WHY the film seems to resonate with so many people, but I personally think that the mysticism of the story, the atmospheric Scottish landscape and excellent acting all have something to do with the films longstanding appeal.

Here, Powell and Pressburger decide to tackle Death, Life after Death and the Power of Love. David Niven plays Peter Carter a pilot who jumps out of his plane and doesn’t die. Death has been robbed and a trial has been set and Carter has to argue for his life before the powers that be. Problem is, Carter has fallen in love during his “stolen hours” which has complicated matters somewhat. 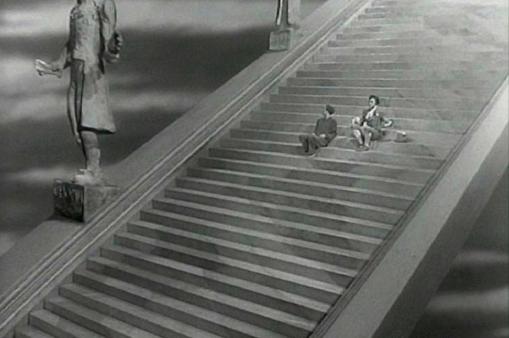 Roger Livesey (who many speculate was an alter-ego of Michael Powell’s) is Dr. Reeves, who looks after Carter and ends up having to defend him against historical persons in a heavenly court of law. Really, at its heart, it is about the redemptive power of love on Earth and speculates wildly on life after death, the nature of Time and why we are really here. It’s worth watching just for the “Stairway to Heaven” sequence alone and the laughable “English Culture vs. American Culture” trail. Be warned, stereotypes abound. 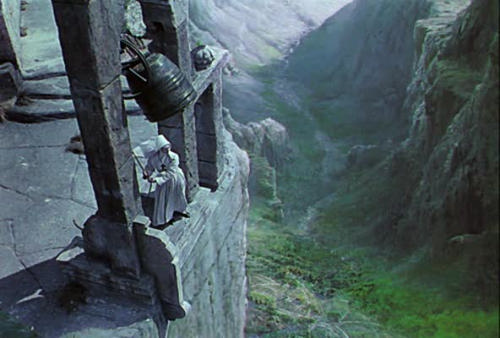 How does one balance out sexuality with spirituality? More often than not, many spiritual teachings talk about squashing those feelings and sentiments – usually with disastrous results and “Black Narcissus” shows up how these instincts can sometimes go wrong. Very wrong. Based on story by Rumer Godden, the film is set at a convent high in the Himalayas where the wind never stops blowing. The convent itself used to be a bordello but has since been converted. The exotic, sensual but isolated surroundings eventually get to the nuns.

Having a mentally unbalanced, but sexually repressed nun in the form of Sister Ruth (Kathleen Byron) and a walking stud-muffin like Mr. Dean (David Farrar) doesn’t help matters in the least. The entire film was shot on a soundstage in England, very far from India yet you’re taken in completely. The fight between the “good” nun and the “bad” nun will leave you on the edge of your nerves.

How does the artist answer his or her true calling, remain faithful to it in face of outside pressures particularly, Love? Can two great passions, such as love and the artistic impulse truly occupy the same space? Loosely based on the Hans Christian Anderson fairy tale, it follows the rise of a ballerina Vicky Page (real-life ballerina Moira Shearer) from relative obscurity to the heights of artistic success, all under the watchful eye of an artistic Svengali ballet impresario Boris Lermontov. Moira falls in love with a composer and that places her role as prima ballerina within the touring company at odds with Lermontov who has even bigger plans for her. Upon telling him of her wishes to follow her heart, Lermontov declares, “A dancer who relies upon the doubtful comforts of human love will never be a great dancer. Never.” 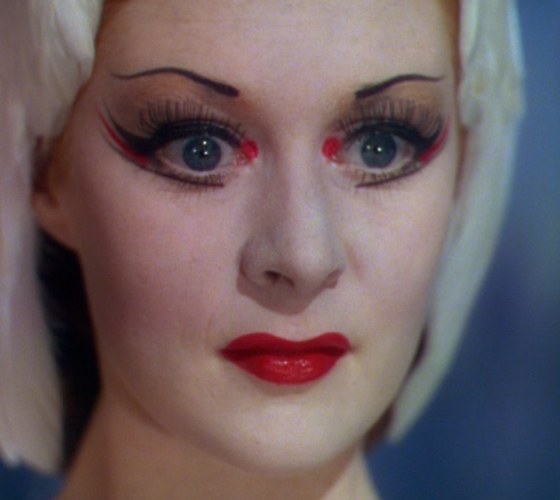 The highlight of this film is the actual ballet sequence which runs for 15 minutes during the middle of the film and is probably the most surreal, beautiful piece of film-making ever committed to celluloid. A young woman sees a pair of red shoes in a shop window, which are offered to her by the demonic Shoemaker. She puts them on and begins to dance with her beau. They go to a carnival, where she seems to forget about the beau as she dances with every man she comes across. She attempts to return home to her mother, but the red shoes, controlled by the Shoemaker, keeps her dancing. She falls into a netherworld, where she dances with a piece of newspaper which turns briefly into her beau. She is then beset by grotesque creatures, including the Shoemaker, who converge upon her. They abruptly disappear, leaving her alone. No matter where she flees, the shoes refuse to stop dancing. Near death from exhaustion, clothed in rags, she finds herself in front of a church where a funeral is in progress. The priest offers to help her. She motions to him to remove the shoes, and as he does so, she dies. He carries her into the church, and the Shoemaker retrieves the shoes, to be offered to his next victim. (In the case of the fairy tale, the red shoes can be read as any earthly enticement).

If you love watching serious films as much as I do, do yourself a favour and find these movies. They just don’t make them like this anymore, that’s for sure.